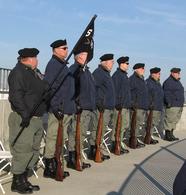 Military funeral honors include the presence of an honors detail to fold and present the U.S. flag to the next of kin and play "Taps," either by a high-quality recording or by a bugler. The law defines a military funeral honors detail as two or more uniformed military persons, with at least one being a member of the veteran's branch of military service. Taps will be played by a bugle if available, but today the military services have so few buglers that they often cannot provide them.

The Sacramento Valley National Cemetery Support Committee (SVNCSC) is organized exclusively for charitable purposes within the meaning of § 501(c)(3) of the Internal Revenue Code.